While on vacation at the cottage, I spent a lot of time (too much time), photographing various mushrooms and fungi. I thought this little gem was some king of fungus, but I was wrong.
Click on the pics to enlarge 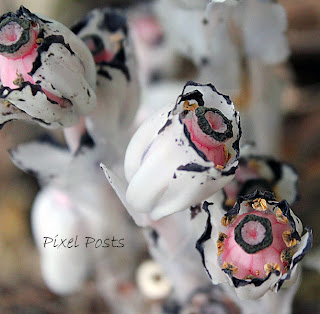 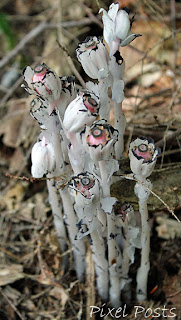 This is one of about 3000 species of non-photosynthetic (i.e. heterotrophic) flowering plants. It's white and doesn't have any chlorophyll. Instead of generating energy from sunlight, it is parasitic. Its hosts are certain fungi that are mycorrhizal with trees, meaning it ultimately gets its energy from photosynthetic trees. (Thanks for that info Wikipedia).
It can grow in very dark environments as on the floor of dense forests, which is exactly where I found it!


For more Macro shots of just about everything,
click on over to Lisa's Chaos - Macro Monday!