The little Carolina wren (AKA Pip) is still around.
With temperatures hovering around -10 to -15 it's important to keep him well fed! 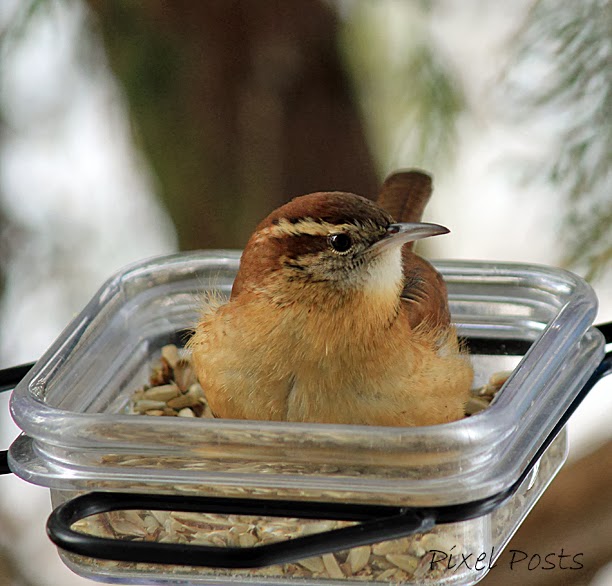 From our house to yours... 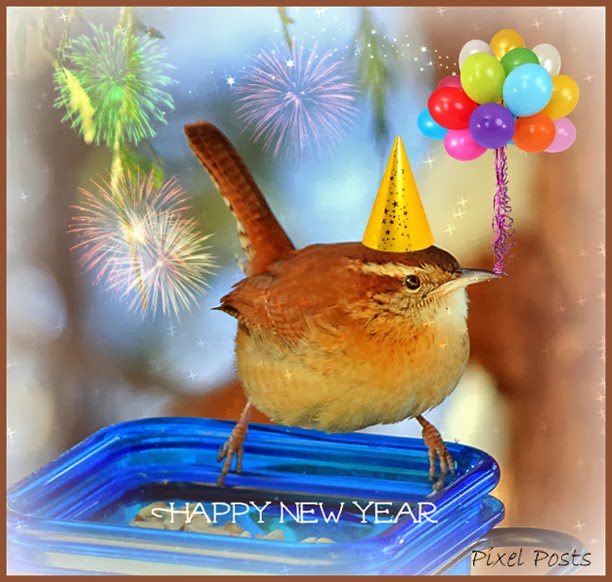 Beep (my granddaughter) and I, had some fun editing our photos.
She has started a blog featuring photos she is taking,
with her new Nikon Cool Pix camera she got for Christmas.
Check out  Beep's Blog HERE. 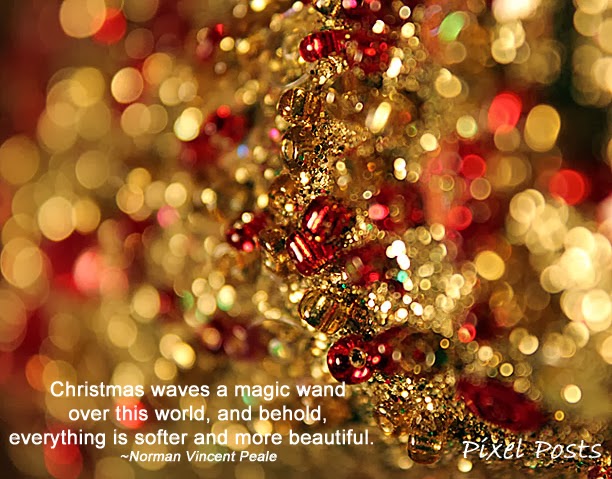 sharing with...
RANDOM 5 FRIDAY
where you share 5 random facts about you, your day,
your pets, your kids, whatever...
1. Christmas comes at the same time every year, but as the years go by, I find that it has a way of sneaking up on me unexpectedly!
2.  I've always loved shopping, and have been a "shop till you drop" person, but this year, just as I was about to drop, I decided that next year, I will drop the shopping, and buy online.
3. Christmas dinner at our house NEVER includes turkey. No one likes it. We have chicken, prime rib, and ham.


4. I miss my dad more and more each Christmas. He passed away 12 years ago, a few weeks before Christmas. I will never get used to that empty place at the Christmas dinner table, and I will always raise my glass, and quietly wish him "Merry Christmas" at the end of the meal.
5. We also celebrate the Winter Solstice every year. Our granddaughter was born on the Solstice, and she surely is the light of our lives!
I'm taking a blogging break for the holidays.

Wishing you and yours,
the best of the holiday season!
Happy Solstice
Merry Christmas
Joyeux Noël
~ ~ ~ ~ ~

My granddaughter (Beep) helped make some bird feeder rolls the other day.
(Edit: Since many asked, we use a mixture of peanut butter and oatmeal, 4-1 ratio, smear it thickly over the tube, then roll it in seeds. The oatmeal makes the pb less sticky so it won't gum up the bird's beaks. That's not a problem in freezing temperatures though) 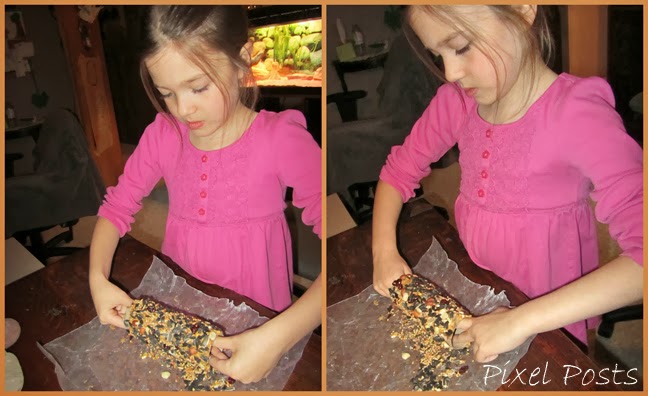 This little guy loves them! 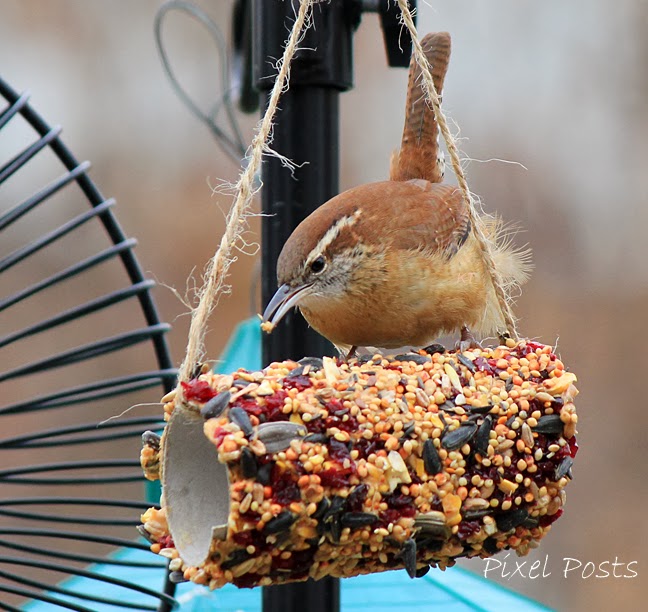 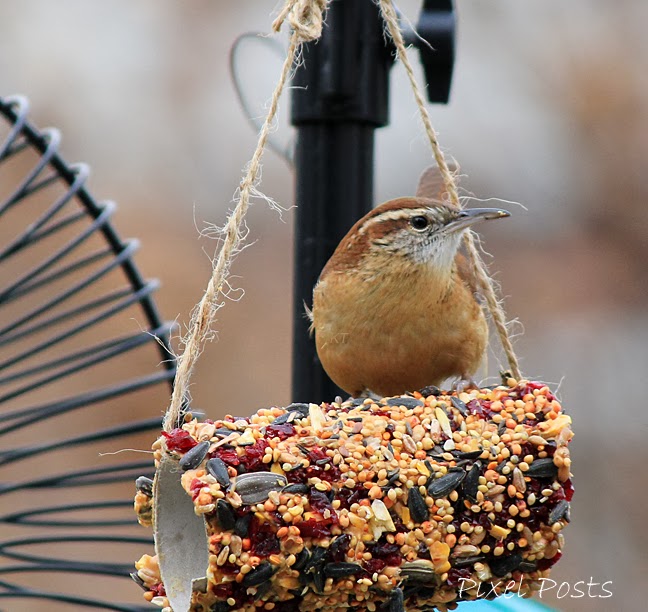 The Downy tried one too! 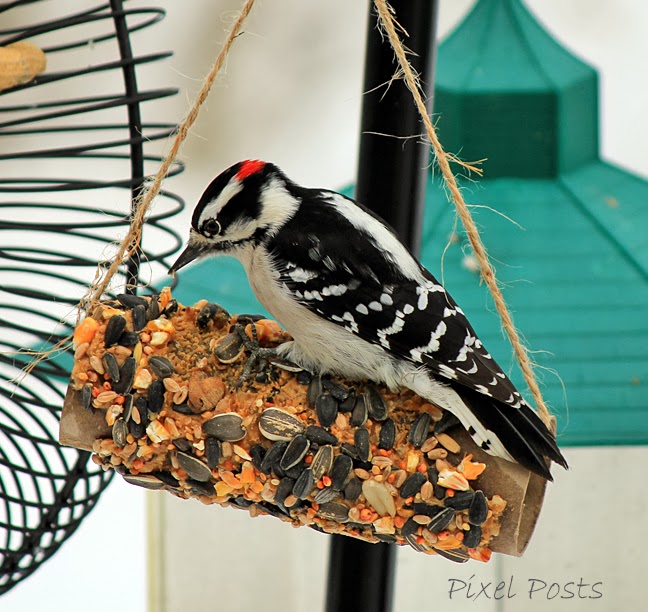 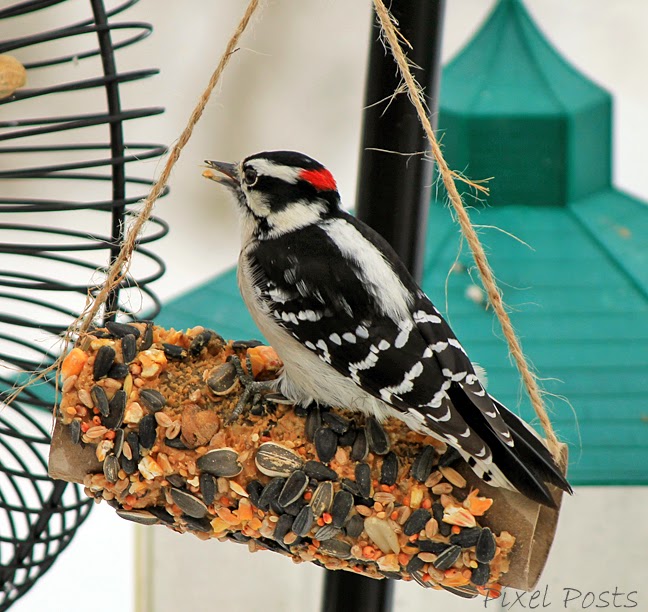 We put one out in the cedar tree where there would be more shelter for the birds,
or ummmmm....
Bandit (Black Squirrel) 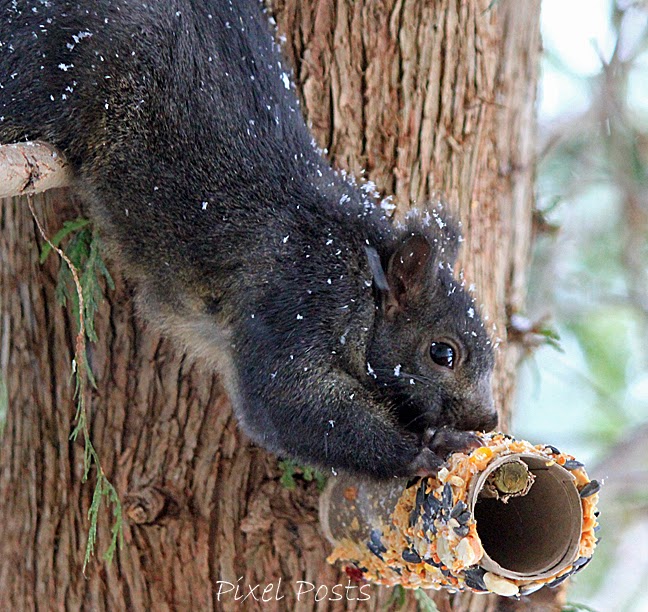 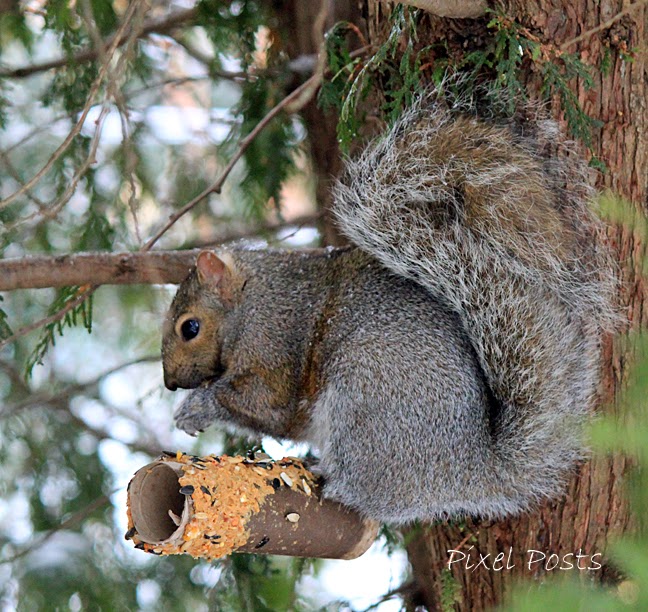 Hosting a meme takes a lot of time, effort and dedication.
Without these memes, many blogger's photos would never be viewed,
so I am sending out a big "Thank you" to all the meme hosts!
sharing with...
NATURE NOTES (Michelle)
OUR WORLD TUESDAY  (Lady Fi)
WEDNESDAY AROUND THE WORLD (Communal Global)
WILD BIRD WEDNESDAY (Stewart)
OUTDOOR WEDNESDAY (Susan)
~ ~ ~ ~ ~
Posted by Karen at Tuesday, December 17, 2013 52 comments:

It's such a busy time of year for everyone! I have been very ill with pneumonia for over 6 weeks, but I am happy (and relieved) to report, I am getting better...but now I have a lot of catching up to do in a very short period of time, to get ready for Christmas.
So...today's post is 3 photos that I am sharing with many memes. I usually post one theme for various memes, but I am contributing to numerous ones, all at once this weekend, due to time constraints. I snapped these pics from inside my home, through the windows (again), while I was sick.
Hosting a meme takes a lot of time, effort and dedication. Without these memes, many blogger's photos would never be viewed, so I am sending out a big "Thank you" to all the meme hosts!
sharing with...
I'D RATHER B BIRDIN'   (Anni)
THE WEEKLY TOP SHOT  (Madge) 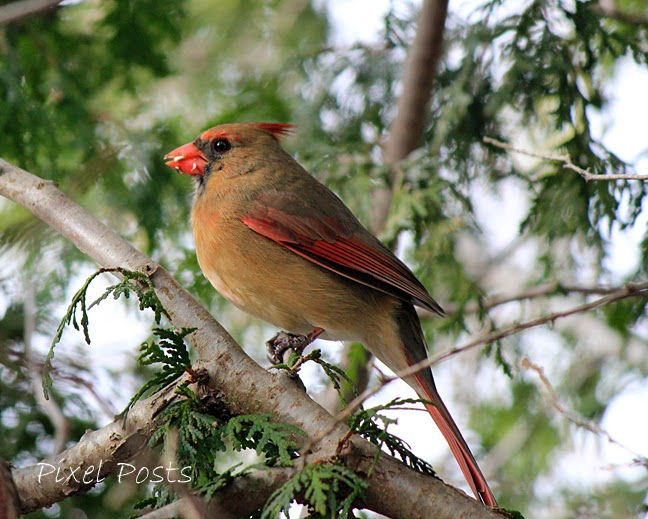 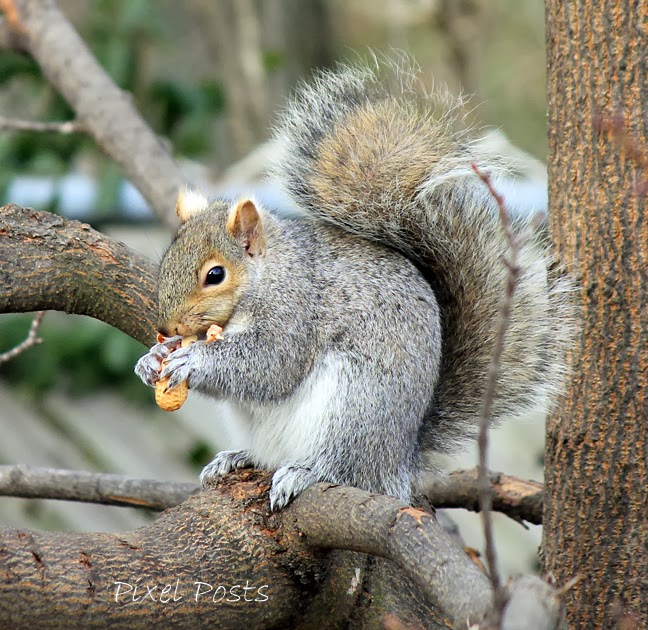 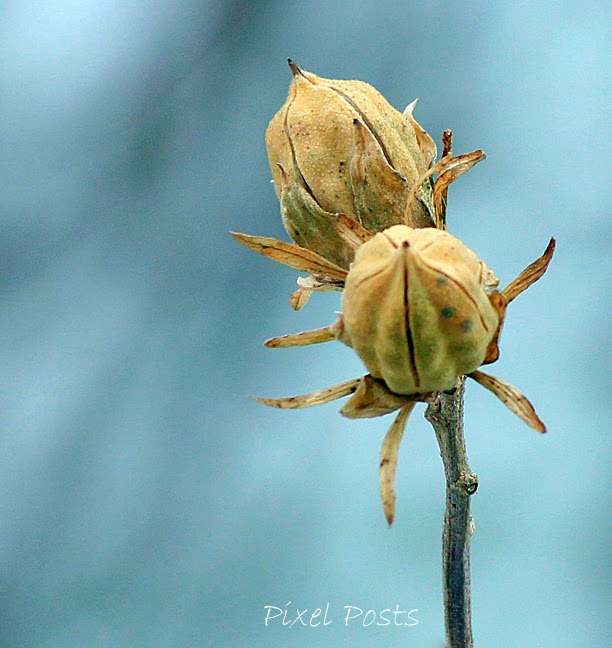 I also want to thank my followers for stopping by and leaving such kind comments! 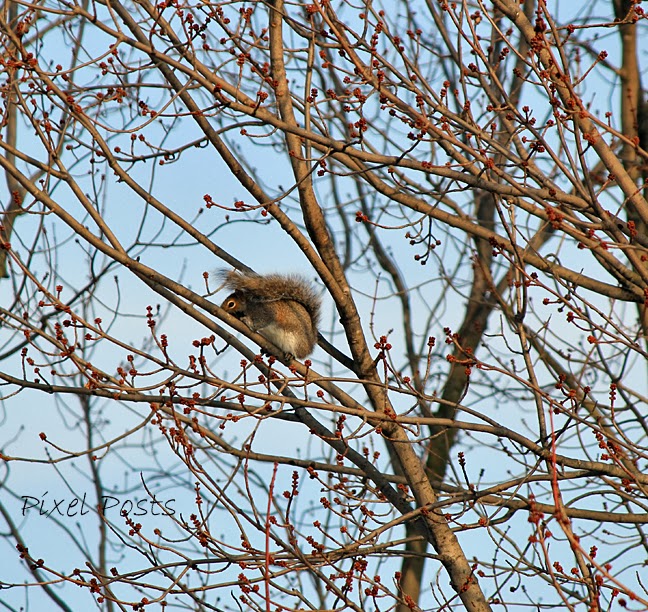 sharing with...
SHARE THE JOY THURSDAY
We went to our granddaughter's school Christmas concert last night.
She is in the junior choir - grades 4-6. 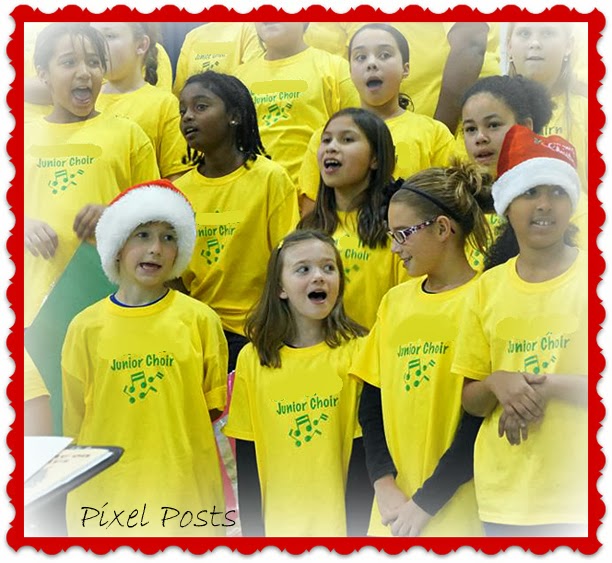 It was so nice to see this little guy (Pipsqueak) on the brush pile over the weekend.
I haven't seen him since October
Carolina Wren 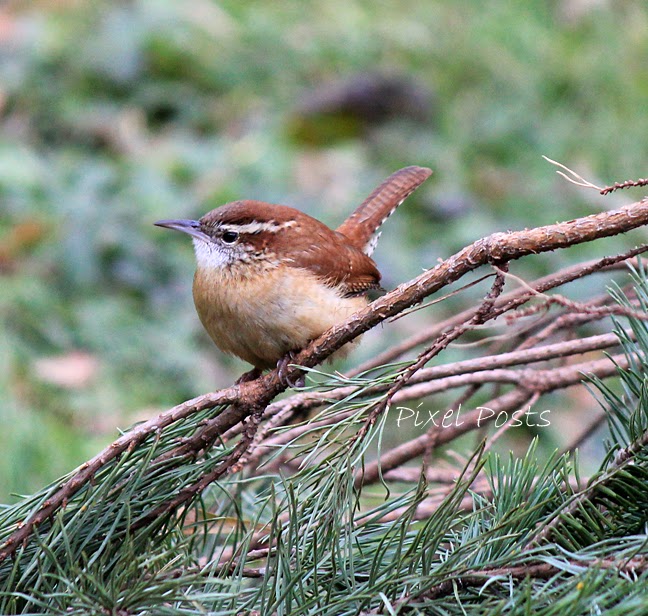 We live slightly above the northern most tip of their range,
so they are not often seen here at this time of year. 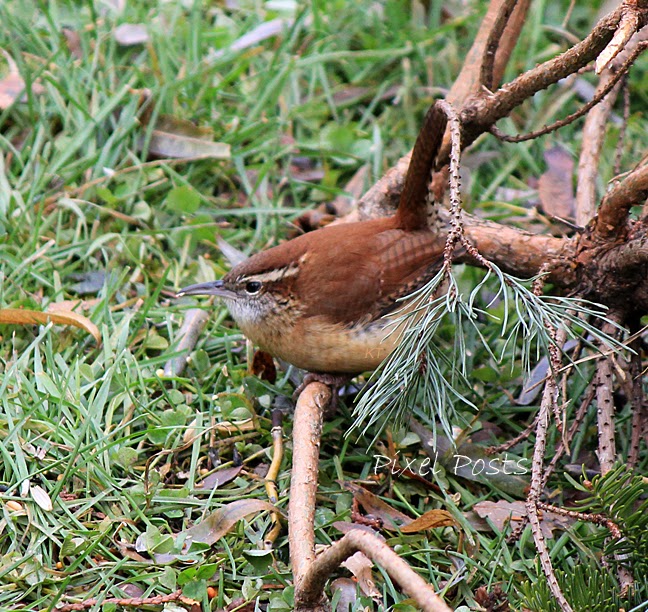 Our autumn was warm, and before today, we have only had one covering of snow,
that disappeared quite quickly. 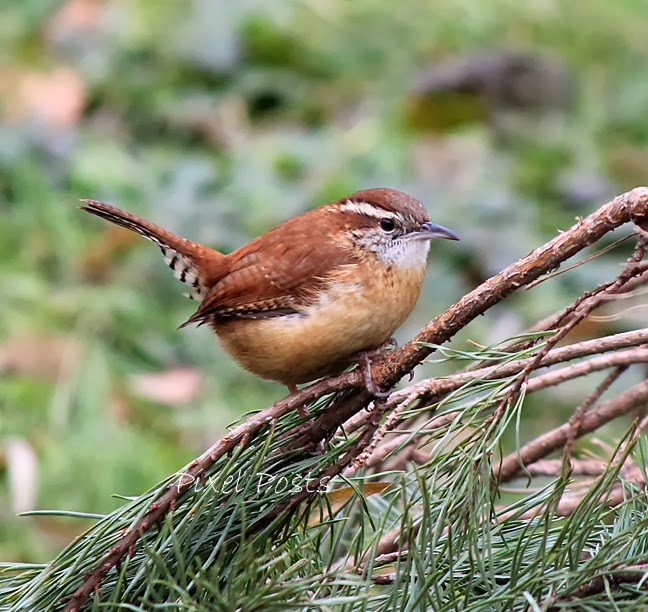 I hope the brush pile will help protect him over the winter, because
it's -6 this morning, with a light covering of snow.
I think winter has arrived!
sharing with...
NATURE NOTES
OUR WORLD TUESDAY
WEDNESDAY AROUND THE WORLD
WILD BIRD WEDNESDAY
OUTDOOR WEDNESDAY
~ ~ ~ ~ ~ 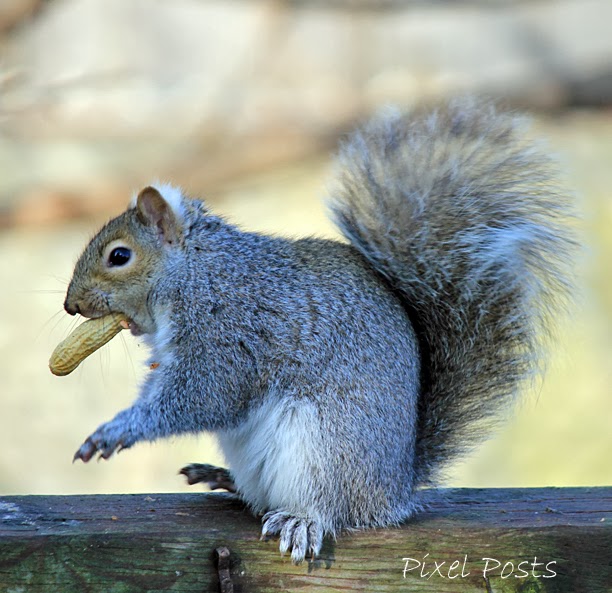 sharing with...
THE WEEKLY TOP SHOT 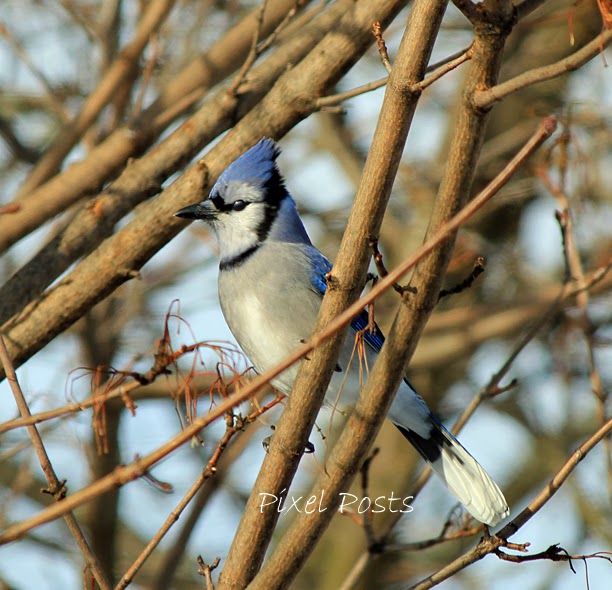 Blue Jay
sharing with...
I'D RATHER B BIRDIN' 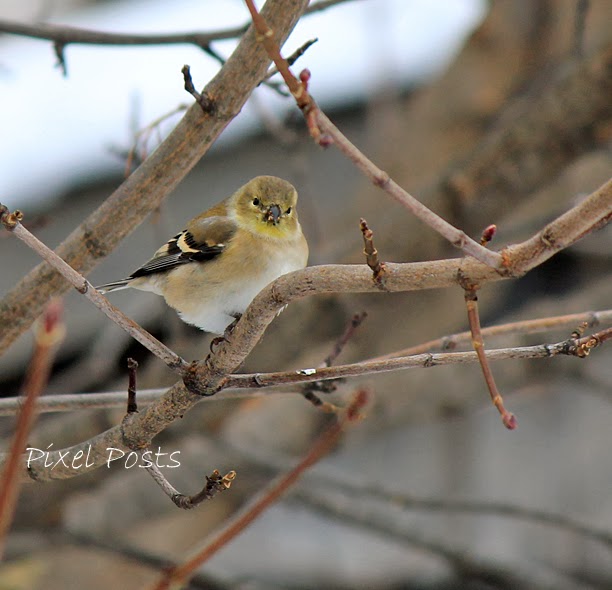 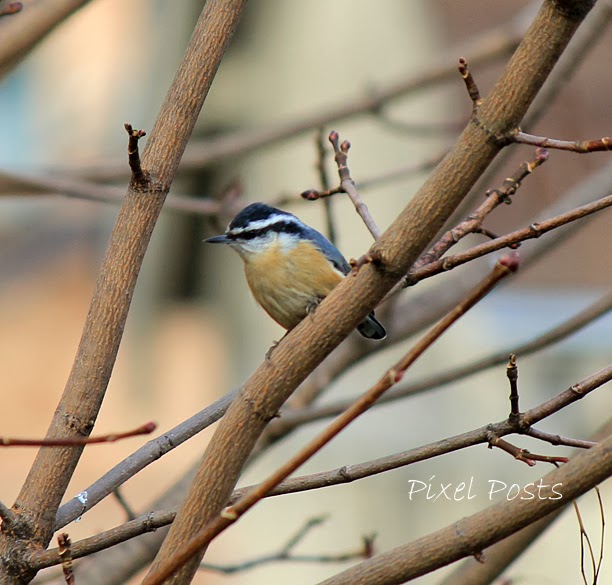 SATURDAY'S CRITTERS is a new meme at "Viewing Nature With Eileen" 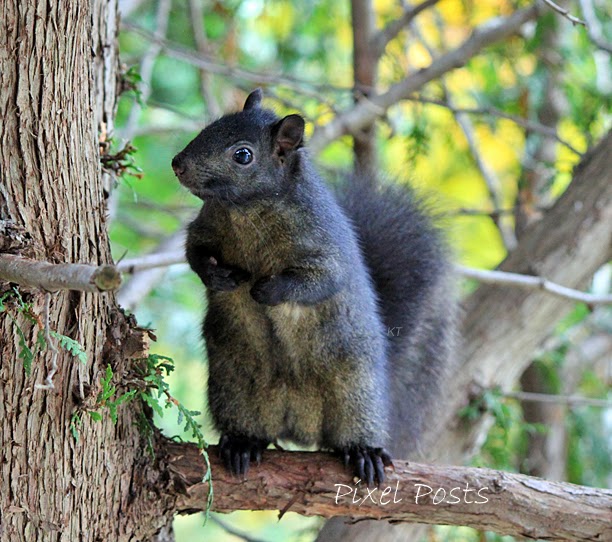 Email ThisBlogThis!Share to TwitterShare to FacebookShare to Pinterest
Labels: CameraCritters, I'd Rather B Birdin', Saturday critters, weekly top shot 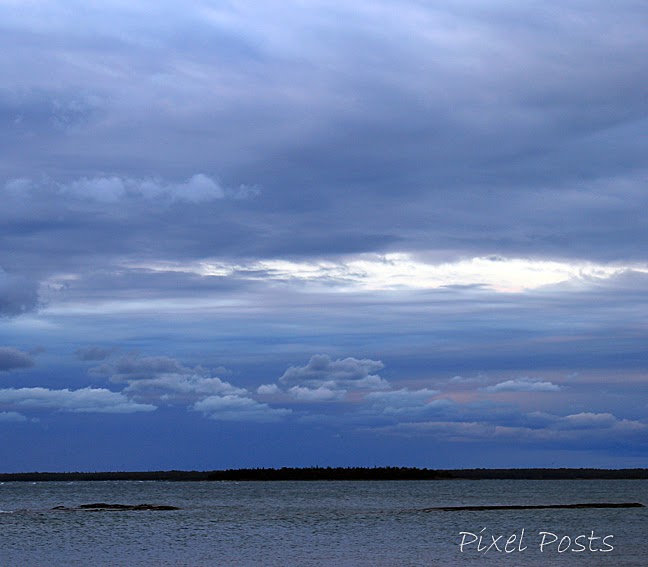 Bad News At The Feeders

One day last week, I heard the Blue Jays screaming like crazy outside.
I though gee, did they eat all those peanuts already!
Then I realized it was their alarm call!
I looked out the window and saw this perched on the fence! 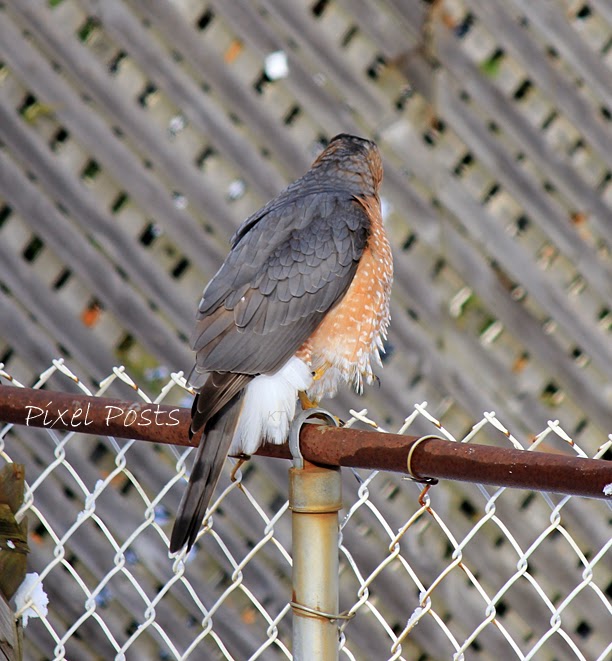 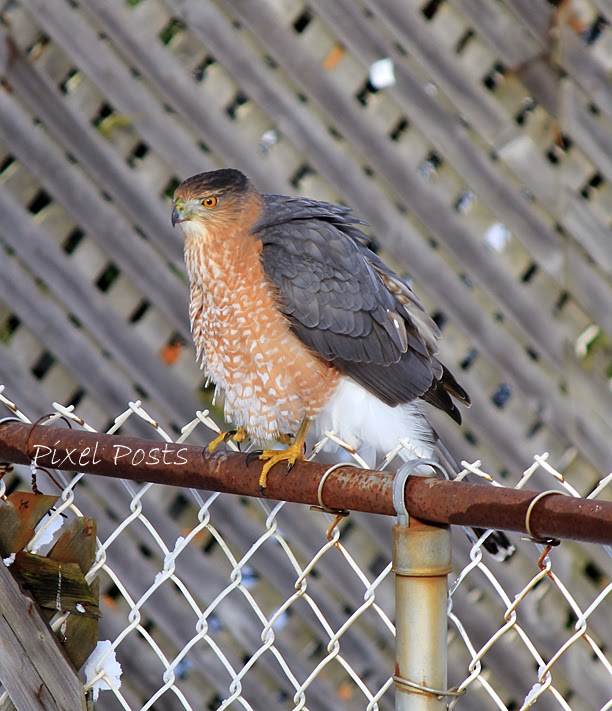 A Blue Jay was taken early in the autumn, just a few feathers left on the ground.
I suspected a hawk, but I didn't see the predator.
On this day, I saw it. 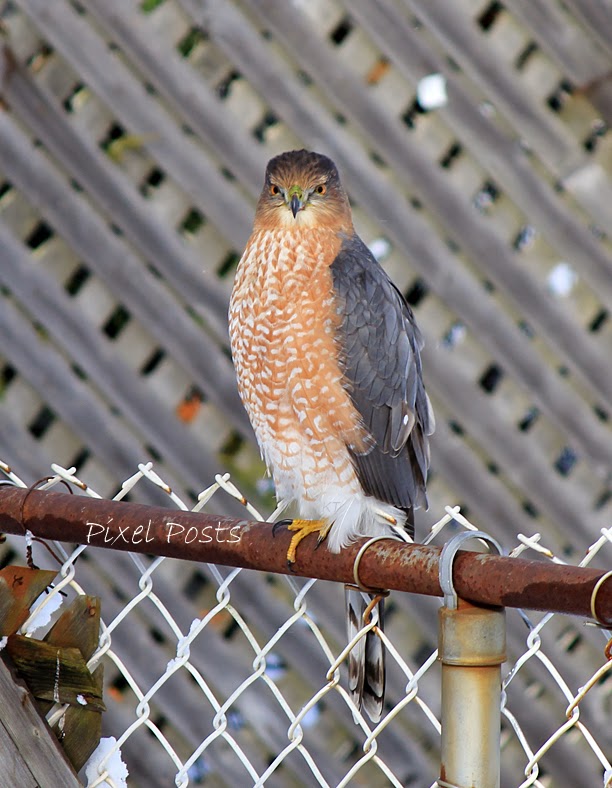 Bad news at the feeders. 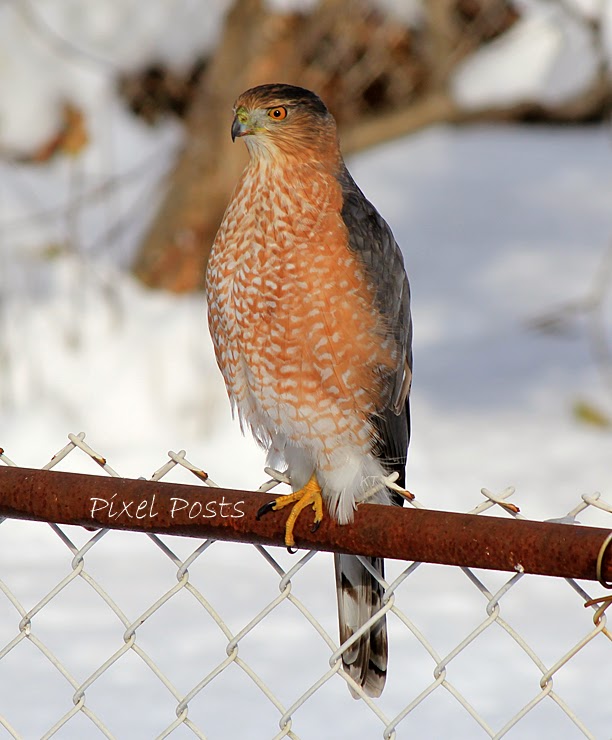 But what a magnificent bird, bold and beautiful...
and it's a lifer for me.
Cooper's Hawk (Accipiter cooperii)

The hawk has taken two birds (that I know of), from our yard in a week.
I have pondered over taking the feeders down for a while (as suggested by Cornell) to discourage the hawk from using them as it's own personal smorgasbord. But, I'm not sure if that would solve the problem. Although we live in the suburbs, within 2-4 blocks in all directions, we are surrounded by a conservation forested area, a river, and 6 "kettle lake" ponds in an Environmentally Significant Area with forests, wetlands and marshes... so, I expect that more than one hawk will be cruising the area.
For now, Hubber's and I are busy constructing some new brush piles, and a roosting box or two for the songbirds to take cover in.
sharing with...

Email ThisBlogThis!Share to TwitterShare to FacebookShare to Pinterest
Labels: I'd Rather B Birdin', nature notes, outdoorwednesday, wild bird wednesday

It's a bit chilly in my world. 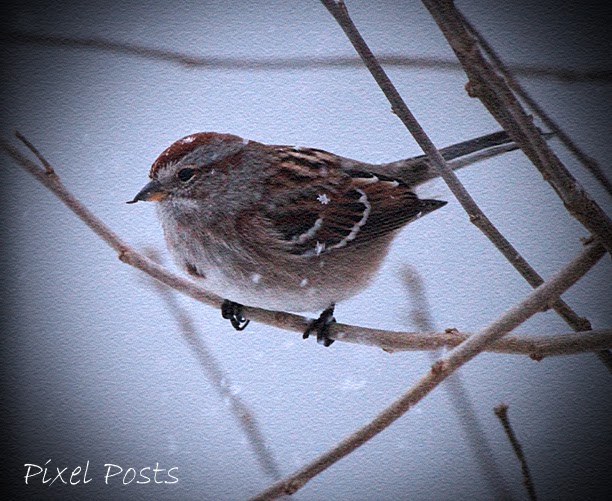