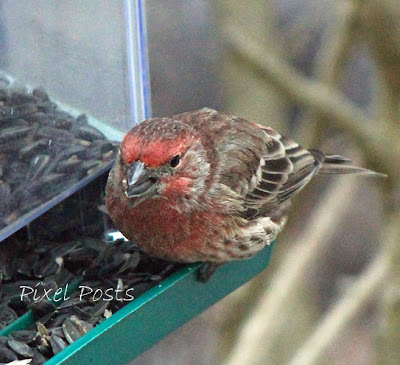 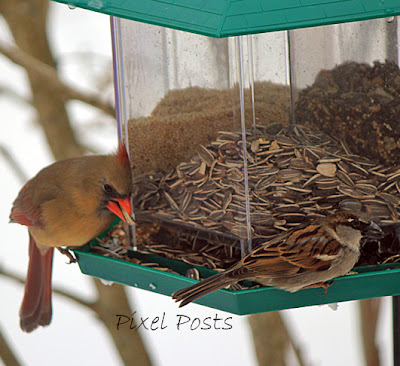 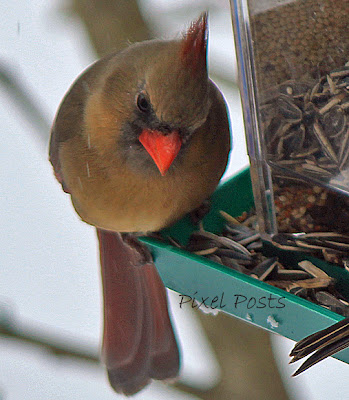 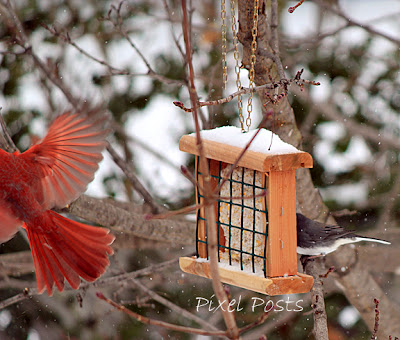 Oh, I do love your birds, Karen, and what wonderful captures! Your temps sound like the ones we had when we lived in Montana!! It's been a very, very mild winter here so for -- gray, foggy and chilly, but not that winter-like at all! Delightful post! Have a good week! Stay warm!

oooohhhh karen, i so get it. i do the same thing. sometimes the window is open but sometimes i shoot right thru the glass. often i can't tell the difference. the hubs keeps the bird windows very clean.

these are wonderful, so glad you have a pretty view when you are stuck inside!!

That's so cool that you can do bird photography thru the windows of your home. Loved that last shot. You will get that junco soon I hope! They are pretty little birds.

Awww...great pictures! I too have to shoot from the house, and there's a backlight usually. Going out today to try to get some pictures in nature. I'm tired of trying to capture the activity in my yard with such little success. :-)

They are nice and photogenic Karen.

you did great! love the feather spread in the last!

I too like the cardinal take off. Boom & Gary of the Vermilon River, Canada.

Love your view. B

Carol of: (A Creative Harbor) ^_^ ~ artmusedog and Carol on blogger

Ahhhhh.....Karen I love these! I have been to Ontario many times with my husband and we love it there.

Oh the red in the Cardinal is so so brilliant! You did an awesome job with these images!

I just joined your people who pop in. I love birding. I am new to it but I love it!

I am in Oklahoma and the Canadians and Eagles just started arriving here a few weeks ago. They should be headed your way soon!

Aha, I really love your window location, a very good spot to see these lovely birdies!

You are right, too cold to be in the negative!

That was a beautiful bird in the last shot. You got a good part of it.

If it weren't for being able to shoot the birds through my window I wouldn't have anything to post.:)
Love your little house finch!
I like that sectioned bird feeder - neat.

Wonderful captures Karen - I bet all the birds are so thankful for the food you provide! Thanks for sharing (in every respect!) and for stopping by my blog.

The shot of the cardinal's wing and spread tail is wonderful!
I can't imagine such cold temperatures; Jerusalem seldom goes below freezing.
Shalom to you, Karen.

With views like that from the window I don't think my dishes would ever get done.

first off......those temps! My goodness that's cold. But the birds don't seem to mind. You captured them wonderfully. That cardinal flying off ---it that were my attempt, the tail would be a great big red blur ---this one is so detailed...marvelous.

Nice looking birds - I am really going to try to get a bird feeder happening this winter.

Hello Karen,
Lovely and gorgeous!! Especially I love the female Cardinal. She is inclining the head slightly as if she was thinking something.
Have a great week!
keiko

I miss all the wonderful birds I used to see when I lived in Jackson. These photos are nice reminders. :)

How lucky you are to see the birds so close from your window!

All of the shots are beautiful but that last one is pure magic!!! :)

Brrrrr. These are beautiful photos Karen! The close-up of the female Northern Cardinal is my fave.

He may be headless, but the cardinal in flight is gorgeous.

Wonderful shots of the birds through the window.

Your pictures are great from inside,I can`t bear the cold either.Luckily we have huge sliding glass doors for a good view of the feeder.I particulary love the cardinal`s feathers in flight,so beautiful,have a great day & hope your spring is just around the corner!phyllis

Love your photos from the garden!

Great photos through the glass.

can´t help it but I love the last shot. It is so typical just the rear end of them. Still I love the clear and crisp shot.

Lovely photos! Like the female Cardinal, don't remember if I have seen one before. And the last shot, funny, what a beauty the red one is!
Greetings Pia

Fantastic shots Karen, especially through two panes of glass.
Hopefully next time the Junco will be face first.

lovely pics! so sharp and clear, especially when shot through a window! well done! *VBS*

birds sure love those sunflower seeds hey? we have all kinds of very colorful parrots here and they tuck into them bigtime also! *S*

Great collection of birds, I love the cardinals. They look so bright and pretty in the winter.

And what a beautiful view you have from both your kitchen and bedroom window. I have been bemoaning the fact that we were at 0 degrees the last few days ... -22, OMG that is just scary! Love your pictures, the house finch, the partial cardinal and Junco ... but most of all the female Cardinal. They are my favorite. Not as bright as Dad, but oh the beautiful subtle colors. Thanks for stopping by my blog and for your nice comments.

Andrea @ From the Sol

The colors and movement are amazing. You are a marvel.

great shots of the feeder...love the red on the wings of the cardinal...the female is pretty also...thanks so much for visiting my blog. cheers.

Nice images through the window! How neat to have activity and color at your feeder in spite of the cold.

Gorgeous shots! We are so ready for the finches to build in our ferns. :)

They are beautiful photos, Karen!
My feeder will only last around 15 minutes as the squirrels won't let any other critters come near!

What great window views you have!

Great idea taking photos from the window--lovely birds! Thank you for visiting my blog :)

Those are excellent bird shots especially looking through a window.

brrrrr. beautiful photos Karen.... I adore the translucence of the cardinals wing spread wide as it is preparing to take flight in the last photo...wow!

Great photos of the birds.

You got some very nice images Karen, and I also take many through the glass...why get all bundled up to go outside, when you can sip hot cocoa and take them through the window;')~

Lovely collection Karen..I haven't been out with the camera either and what I really like about this is that it shows how much enjoyment someone can have with a feeder near or on a window..Love this...Michelle

Such sweet pictures. Love the female.

Your window is obviously a lot cleaner than mine Karen!! Great birds; they must really appreciate your feeders especially this time of year.

I have Dark Eyed Juncos around my house too. They don't get on the feeders, instead they like to eat the seeds that fall on the ground. I love how they hop along! -- Min

That`s a great series of bird shots. The cardinal in flight looks so cool, and thanks for doing those dishes.

wow!! what great photos. I miss my birds...the squirrels won... the close ups highlight their beauty!