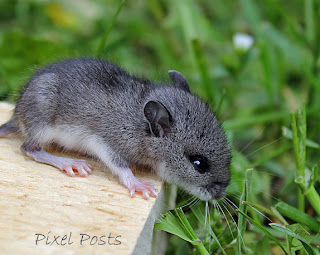 Hubber's found this little sweetie in the grass before he set about mowing the lawn. Not including tail length, this baby deer mouse is just over 1-1/2 inch long. 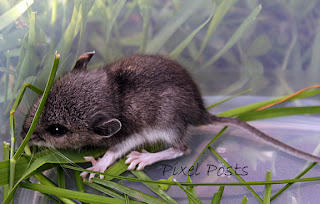 Newly out of the nest, he is not yet fearful of humans, so I picked him up and put him in a container, until the lawn had been mown. 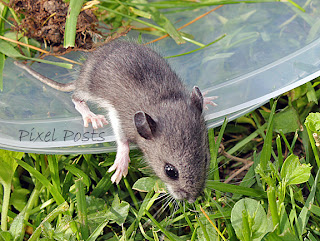 When it was safe, I let him go, back near where he was found.
Click on the small pics to enlarge
The deer mouse (Peromyscus maniculatus), is grayish to light brown on top, with a white belly. It has large ears and a furry tail and has eyes that appear to “bug out.” The deer mouse is named for its colouration, which may resemble that of a white-tailed deer. The typical city-dwelling house mouse, is usually entirely grey or light brown (no white on the belly).